A short video with English subtitles on the international  directives for the valorisation of artisanal fishing, as discussed by fishers groups from all over Brazil at their meeting in Brasilia […]

Link to excelent piece by Mar Sem Fim about Prainha. Only available in Portuguese. Resex Prainha do Canto Verde.

Today is the start of the lobster season but once again there is little to celebrate. As anyone who has followed even a little of this blog will know, representatives […]

The Cumurupim (tarpon) are back!

Trying to post more regularly here but so much going on with my husbands treatment for kidney failure, it's hard to keep up.
He's now on the transplant list so fingers crossed he will get a kidney soon.
Neu's desperate to get back to fishing on a more regular basis, though a social worker was depressingly pessimistic about that, however he still goes fishing as and when he can and the doctor who first treated him disagrees with the social worker, saying Neu will be able to return to fishing within certain limits. I know there will be no way of keeping him off the water once he's had a transplant. 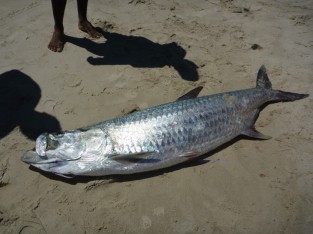 Caught on a hand line

Two camuripim lashed to the deck of Neu’s jangada.

A newborn Manatee stranded on the beach

The poor thing was newborn, its umbilical cord was still attached, which meant it had probably not even had a drink of its mother’s milk.

Covid, DIY and back to the hospital.

Back in August, with the Covid restrictions in place, I decided to use the time at home for a spot of DIY and set about turning some lovely wooden doors, which I’d saved for just such a project, into new kitchen worktops. I’d no sooner started the work when Neu was referred by the doctor […]

In 2019, I wrote about my investigations into the mystery bales that washed up on the beaches along the North East coast of Brazil. Since then, I have been in touch with Professor Luis Ernesto from the Institute of Marine Sciences (LABOMAR) at the Federal University of Ceará. This post is about his team’s findings. […]

Please use the comments box or contact form to ask questions, leave your thoughts and let me know what you think of the blog.

Our seas are being drastically overfished using unsustainable fishing methods which puts all of us at risk but especially those in small coastal communities.

It's easy to think it is someone elses problem, but the seas are an ecosystem of which we know very little and their degredation is a threat to all of us, not just the species of fish who's numbers are dwindling, who's habitats are being destroyed, nor just those who make a living from or like to eat fish.

Consumer choice does make a difference, become more informed about the fish you buy.

The following sites offer information about fish species and fishing methods enabling you to make an educated choice about the fish you buy.

Unauthorized use and/or duplication of this material including all photographs, without express and written permission from this blog’s author and owner is strictly prohibited. Excerpts and links may be used, provided that full and clear credit is given to Claire Pattison Valente and Fishing in Brazil with appropriate and specific direction to the original content.

Any adverts on this blog come from WordPress and have nothing to do with me. I do not make any money out of this blog, more's the pitty and unless I specifically say so, do not endorse any of the products that WordPress may choose to show on here.